dines twice at Hutong, at The Shard

I love Northern Chinese cuisine, so have wanted to go to Hutong for some time now. Having finally managed to obtain a table last week, I've been twice in a week.  Why?  Well - on the first occasion we were so impressed by the plumptious kung pao prawns that I just had to have some more!

Sant Pau, the flagship of Carme Ruscalleda, is based in the small town of Sant Pol de Mar, just north of Barcelona. Right on the sea, the restaurant's raison d'être is seasonality and local produce, though often cooked in unexpected ways.  Carme also runs a restaurant in Tokyo, and her strong Japanese influences are palpable.  When we visited, the restaurant was celebrating the 9th anniversary of the Toyko opening, and a number of dishes originated at the Tokyo San Pau. 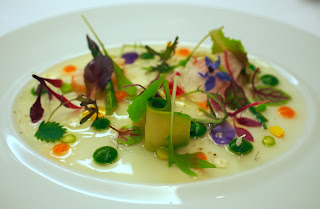 Lasarte is the Barcelona outpost of the Basque chef Martín Berasategui, and the kitchen is run by Paolo Casagrande.  The restaurant is spaciously laid out, and the tiles on the walls replicate the Gaudi tiles on the Paseo de Gracia - a nice touch.

We were impressed by the ingenuity of the menu, and for the most part dishes were very well judged and delivered, both in terms of presentation, quality of ingredients and presentation. 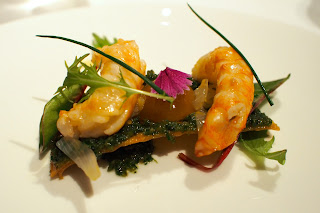 Moments, at the Mandarin Oriental Hotel, is the Barcelona outpost of Carme Ruscalleda's Sant Pau restaurant at Sant Pol del Mar.  The kitchen is run by Carme's son, Raül Balam, and serves Catlan food in a modern style. 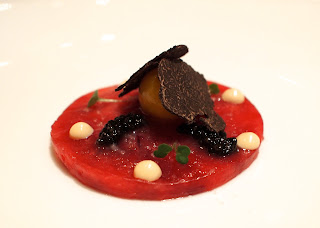 I'm in Barcelona, it's 20ºC on the terrace, and Femme D'Argent is blasting on my headphones - what's not to love?

Add to that an agenda that includes three 2* Michelin restaurants, and one 3*, and you know my mood is going to be relaxed, expansive, and happy... 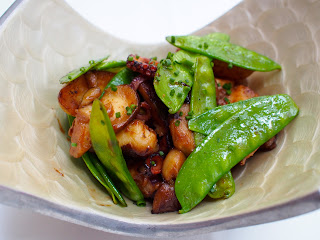 The Blanc Brasserie is the main restaurant at the Mandarin Oriental in Barcelona, though they also have the Michelin starred Moments.

Food is well executed, and the kitchen turn out a wide variety of Catalan, Spanish and Oriental dishes.  We particularly enjoyed the miso octopus, which was succulent and tender, and I loved the inclusion of pink peppercorns in the yakitori which gave it a piquancy not usually found.